“Music Publishing 2020: The Return of the Fabulous Brabec Brothers” 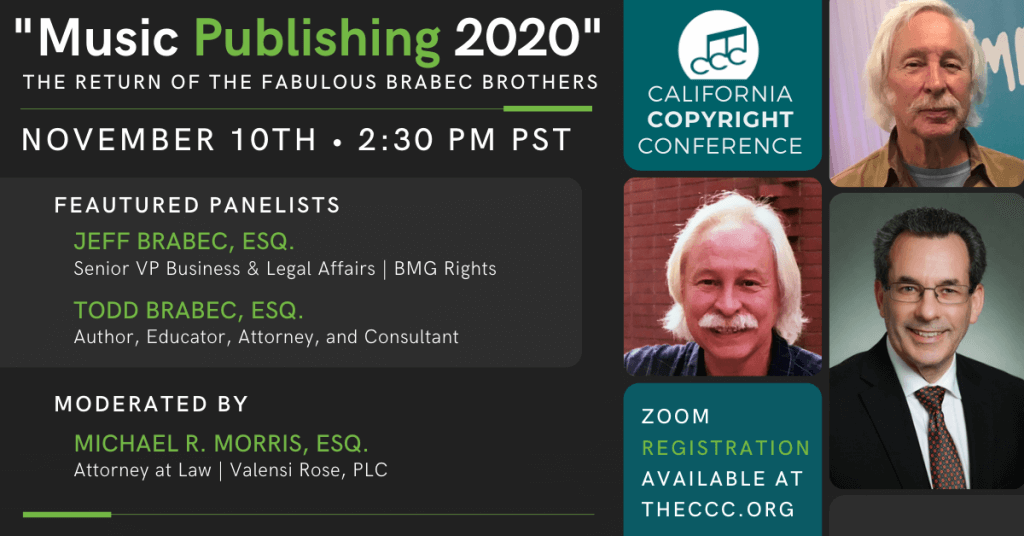 “MUSIC PUBLISHING 2020: THE RETURN OF THE FABULOUS BRABEC BROTHERS”

Please join us for a very timely discussion of current and pressing issues affecting the music publishing world. The topics to be addressed by our illustrious panelists will include:

Michael R. Morris has blended his tax law expertise with his passion for music and entertainment, resulting in a practice that is unique.

As a former trial lawyer for the IRS and a Certified Specialist in Taxation Law, Michael provides insightful resolutions to his clients’ complicated tax, estate and business transaction issues. In the entertainment industry, Michael has developed a strong reputation of providing valuable and effective business solutions in areas such as copyright and contractual matters.

Brabec is the co-author of the best-selling book Music, Money, and Success: The Insider’s Guide to Making Money in the Music Business (8th Edition / Schirmer Trade Books/Music Sales). Variety magazine selected the 8th Edition as one of “The Best Music Books of 2019.” He is also co-author of the “Music Publishing” chapter of the 2018 Juris Publications’ multiple volume treatise The Essential Guide to Entertainment Law. He has been awarded the Deems Taylor Award for Excellence in Music Journalism, The Texas Star Award by the Entertainment & Sports Law Section of the State Bar of Texas for Outstanding Contribution and Achievement in the Field of Entertainment Law, and the 2019 California Copyright Conference Apollo Award, Honoring Leadership and Achievement in the Music Industry. Brabec is an adjunct professor at USC Thornton School of Music/Business Division where he teaches music publishing and licensing. He Is also on the board of the Mechanical Licensing Collective (MLC), which was established by the Music Modernization Act.

Todd Brabec, former ASCAP Executive Vice President and Worldwide Director of Membership, is an Entertainment Law attorney, a Deems Taylor award-winning co-author of Music, Money, and Success: The Insider’s Guide to Making Money in the Music Business (8th edition) and the “Music Publishing Law” chapter in the two-volume The Essential Guide to Entertainment Law. He’s an Adjunct Professor at USC, teaching “Music Publishing, Licensing and Film, Television and Video Game Scoring and Song Contracts.” During his 37-year career at ASCAP, he was responsible for signing many of the Society’s most successful film and television composers and songwriters, in addition to changing many of ASCAP’s payment, distribution and survey rules including those that significantly increased the royalties for film and television score and themes. He has written or co-written hundreds of articles on the business and law of music and is the recipient of the Educational Leadership Award (MEIEA), the Texas Star Award for Outstanding Achievement in Entertainment Law, and the California Copyright Conference Apollo Award for Leadership in the Music Industry.