“Goodbye Copyright? The Rise of Trademark and Publicity Rights in the Hip-Hop Music Space” 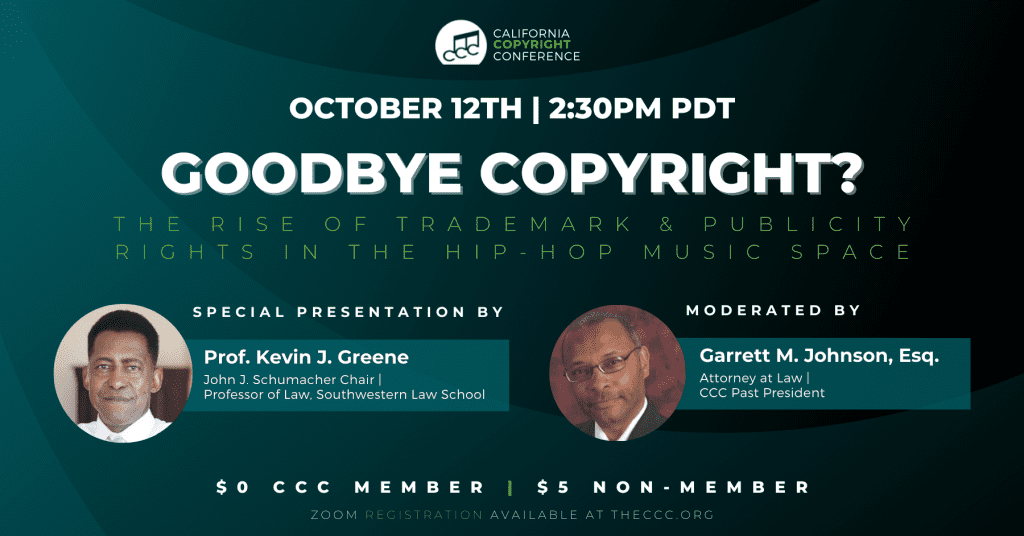 “GOODBYE COPYRIGHT? THE RISE OF TRADEMARK AND PUBLICITY RIGHTS IN THE HIP-HOP MUISC SPACE”

As the lopsided digital streaming model and “360”-style contracts reduce copyright revenue sources for artists, the ancillary rights of trademark and publicity have become more vital than ever for successful artists.

The model of commercialization through ancillary rights was pioneered by hip-hop artists from the inception of the art form, as illustrated by Run-DMC’s landmark Adidas deal in the ’80s.

The registration deadline for this webinar is Tuesday, October 12th at 1:30pm PDT.

*** Please note: Zoom webinar links for this webinar will be emailed to you separately after registration.

Register for this webinar below!

Kevin J. Greene, Esq. joined Southwestern’s faculty in 2020. He is a nationally recognized entertainment and intellectual property law scholar and an expert witness consultant for copyright, trademark, publicity rights, and entertainment contract disputes. He is a highly committed, outstanding teacher as well as a passionate leader and an intellectual property law influencer.

Professor Greene was most recently a tenured Professor of Law at Thomas Jefferson School of Law in San Diego. He has also been a visiting professor at the University of San Diego School of Law. In addition to Contracts and Copyright, he has taught Intellectual Property, Entertainment Law, Music Law, Publicity Rights, International Entertainment Law, and Intellectual Property in the Cannabis Industry.

Professor Greene’s scholarship has garnered national and international recognition in the area of intellectual property law, particularly his pioneering work on African-American music and inequality in copyright law. His article on abusive trademark litigation, published in the Harvard Journal of Law and Public Policy, has been the centerpiece of law conferences at Syracuse Law School and NYU. His copyright scholarship is cited in numerous legal publications and in Congressional hearings. His current project explores intellectual property in the context of hip-hop music.

He has presented his work on IP issues and Contracts across the United States and abroad to organizations such as the American Bar Association’s section on IP, the International Trademark Association, the American Association of Law Schools, Law and Society, Practising Law Institute, the annual South-by-Southwest conference, the Beverly Hills Bar Association and at law schools and universities including Yale, Georgetown, UCLA, and many others.

Professor Greene served as an expert witness consultant for funk music legend George Clinton in a copyright case before the Ninth Circuit Court of Appeals. He has also worked as an expert in copyright matters in the Central District of California and the Southern District of New York. He recently served as the lead IP expert in a landmark $9.5 million right of publicity case in California state court between the heirs of the Hansen Juice and Soda Company and Coca-Cola. In 2016, the government of Taiwan hosted Professor Greene to present a seminar on copyright issues in the context of hip-hop music.

Additional accolades for Professor Greene include: the first law professor voted a Top Ten attorney by the San Diego Bar in the field of IP in 2005, the Intellectual Property Institute of the State Bar of California selected him as its Vanguard Award 2016, winner in the category of Academics, the highest award given by the Bar. In 2018, the American Bar Foundation selected him as a fellow. And in 2020, he was selected by the National Bar Association as a “Top 100” attorney in California and was named an Honorary Advisor/Law Scholar at USIA United Sigma Intelligence Association, an international think tank.