“The Union Intersection with Music: A Primer” 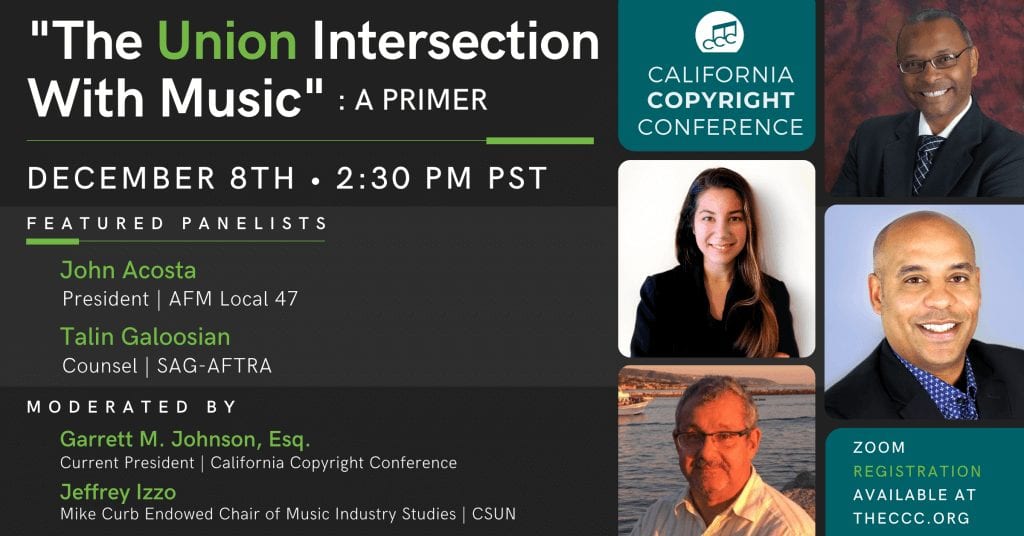 “THE UNION INTERSECTION WITH MUSIC: A PRIMER”

A straightforward explanation of how the AFM and SAG-AFTRA affect creative talent in the marketplace, both for featured talent and supporting players. Topics will include explanation of the relevant rules and regulations pertaining to payment, residual income streams, and pension plans.

Don’t miss out on the CCC Silent Auction benefiting the John Braheny Scholarship at the beginning of the webinar!

This webinar is sponsored by Sound Royalties!

Jeffrey Izzo is Assistant Professor and Mike Curb Endowed Chair of Music Industry Studies at California State University Northridge. An entertainment lawyer for over 25 years and an accomplished composer, lyricist, and performer, he has presented at numerous national and international conferences, is a contributing author to Music Entrepreneurship, and co-author of Introduction to the Music Industry: West Coast Edition. Jeffrey is an ASCAP affiliate and member of The California Copyright Conference, The College Music Society, the Association for Popular Music Education, The Recording Academy, The Society of Composers and Lyricists, the Dramatists Guild, Songwriters of North America, the Association for Popular Music Education, and The International Association for the Study of Popular Music. He is a new monthly columnist for the music education magazine, InTune Monthly.

John Acosta currently serves as President of the American Federation of Musicians Local 47 representing over 7,000 professional musicians in the southern California area. John also serves as an International Executive Board member of the AFM, Vice President on the Los Angeles County Federation of Labor Executive Board, President on the Music Fund of Los Angeles Board of Directors, Director on the Actors Fund Western Council and Director on the Verdugo-Workforce Investment Board. John hails from the Bronx, New York. His father Juan Acosta was a percussionist from Cuba who worked as a touring musician with Latin jazz greats such as Tito Puente and Celia Cruz. In California, John began his recording career working as a composer, guitarist, producer and engineer for artists on Warner Brothers, DreamWorks, Geffen, BMG, Elektra and Capitol Records. John’s work as a musician lead to his work with Local 47, advocating for musicians rights.

Talin Galoosian serves as Counsel of SAG-AFTRA, one of the largest entertainment labor unions in the world, and is responsible for enforcing SAG-AFTRA collective bargaining agreements through arbitration and state/federal litigation. She represents SAG-AFTRA in any proceedings brought by or against the Union, and also helps in SAG-AFTRA’s contractual negotiations process.

Talin received her J.D. from Southwestern Law School, in Los Angeles, and her Bachelor’s Degree from UCSD, in La Jolla. Prior to working at SAG-AFTRA, Talin served as an Associate Attorney at a boutique employment litigation firm. During law school, Talin externed for the Honorable Jay C. Gandhi, clerked for the Office of the Attorney General, and interned for the Office of the City Attorney in Los Angeles. She spent time campaigning for Mayor Eric Garcetti, and co-authored a research paper on U.S. platforms on international legal treaties and instruments while interning for the Center of Human Rights in Padua, Italy.