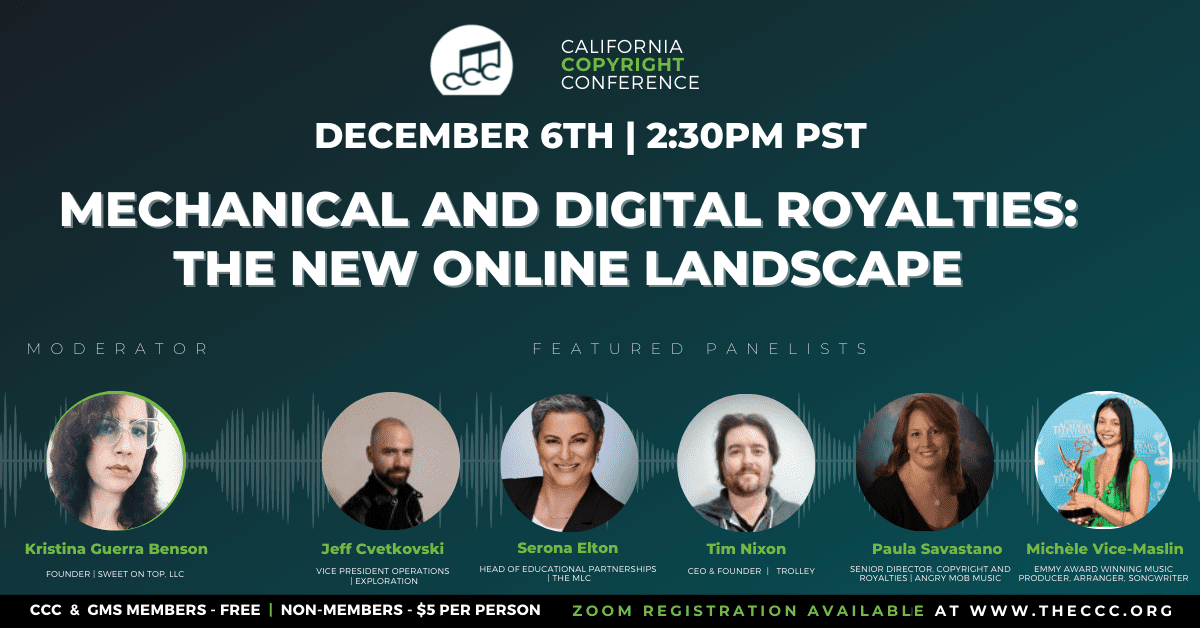 A timely and vital discussion on how royalties for digital mechanical and mechanical royalties are paid. How do they differ from performance? What are the collection sources? How do writers get paid directly when not represented by a publisher or collection agency?

Stick around for the “after hour, happy hour” chat following the webinar!
Catch up and network with the CCC community from the
comfort of your own couch

Kristina began her career with a degree in opera from University of California at Irvine and took piano lessons in her spare time under Miles Davis’s sideman Kei Akagi. After stints as a promoter and DJ, she segued into a role as a branding specialist for DoStuffMedia, where she spearheaded engagement initiatives for brands such as Goose Island, Grey Goose and Pabst Blue Ribbon, working closely with local influencers to produce interactive brand experiences. She went from there to acting as Music Director for Lip Sync, and after many successful placements and two wonderful years at Lip Sync, she decided the time had come to start her own agency. In the short time since it has opened its doors, Sweet On Top has landed placements with high-quality brands such as Apple, Michael Kors, Macy’s, Vogue and St. Regis, promotions for the Olympics and “Songland”; and in television shows including “Station 19,” “Grey’s Anatomy,” “All Rise,” “Firefly Lane,” “High Fidelity,” “Ray Donovan” and “The Blacklist.” Additionally, her writers have secured cuts with Dim Mak and Warner Records’ artists. Kristina also worked closely with the Guild of Music Supervisors’ education committee and is a member of the California Copyright Conference and the Association of Independent Music Publishers.

Jeff Cvetkovski is the Vice President of Operations at Exploration Group. He joined Exploration in 2016 and initially served as a Copyright Manager, specializing in disputes. In 2018, he began his new role with the company as the VP of Operations, which includes overseeing Exploration’s daily operational departments, as well as leading the company’s continued growth in rights administration.

Prior to joining Exploration, Jeff held a variety of positions in music, including in the Copyright and Licensing departments at Music Reports, at Wishing Well Pictures as the music supervisor for the independent film The Challenger, and also established his own music publishing company that specialized in sync licensing and copyright administration for songwriters.

Jeff is a lifelong music fan and musician and very enthusiastic about the music publishing side of the industry. His passion is managing the copyrights of songwriters and music publishers in order to ensure they are receiving all the royalties they are rightfully owed.

Born and raised in Buffalo, New York, Jeff graduated with a Bachelor’s Degree in Music Business from the State University of New York at Fredonia, and currently resides in Los Angeles.

Serona Elton has extensive experience as a music industry professional and educator. She is currently the Head of Educational Partnerships for the MLC. She is also a full professor, Director of the Music Industry Program, and Associate Dean of Administration at the University of Miami Frost School of Music, a Yamaha Master Educator, a licensed attorney, and an alumni of the Nashville-based Leadership Music program. She has worked for major music companies such as Warner Music Group, where she held the position of Vice President, Product Management, and EMI Recorded Music, North America, where she was Vice President, Mechanical Licensing and Repertoire Data Services. She has also provided consulting services to Sony Music Entertainment, Universal Music Group, Zumba Fitness, and other music-related companies.

Serona has served as a president of the Music and Entertainment Industry Educators Association (MEIEA), as a trustee of the Copyright Society of the U.S.A., as the chair of the Florida Bar Entertainment, Arts, and Sports Law Section, and on the Recording Academy, Florida Chapter, Board of Governors. She is co-author of the 13th edition of the Music Business Handbook and Career Guide, and is asked regularly to provide commentary on music industry topics for media outlets such as NPR’s Marketplace, CNN.com, Bloomberg, and Billboard. Her areas of expertise include mechanical licensing, royalties, contract summarization and management, rights management, record company operations and music industry information management. Serona holds a B.S.B.A. in Finance from the University of Florida, an M.M. in Music Media and Industry from the University of Miami and a J.D. from Brooklyn Law School.

Specializing in Copyright, Licensing, Royalties, and Publishing, Paula Savastano has worked in the music business for more than 25 years. As a classically-trained musician, she began her career in Opera Management, but quickly made the switch to the popular music realm. She has worked in administrative management, intellectual property, and royalty departments for several notable companies including Broadcast Music, Inc. (BMI), Spirit Music Group, RykoMusic, Cherry Lane Music, Musical Heritage Society, and Turn Up The Music.

For many years, Paula’s knowledge and experience has been sought after by publishers, record companies, and music creators to assist them with audits, royalty collection and processing, licensing, and copyright issues. After significant and continued demand, she started her own company, SSA Music, which provided licensing, copyright, financial, auditing, and royalty consulting services to a diverse clientele ranging from independent musician to major music publishers and record companies. In 2012, SSA Music expanded to a full-service publishing entity, providing full administration, royalty collections, catalog pitching and song placements. In 2018, SSA Music was disbanded, and Paula went back to her roots as a freelance service provider and worked with several notable clients including Angry Mob Music Group, PEN Music Group, Reach Music Group, and McJames Music. In July 2019, she was hired full-time by Angry Mob Music LLC, as the Senior Director of Copyright and Royalties, where she oversees all of the Copyright and Royalty duties for the company.

Paula has been an active speaker on music publishing, copyright protection, fair use in copyright, royalties, and the changing landscape of copyright as we move into a digital world, at educational conferences and universities around the country for nearly 20 years. She has held the position of Adjunct Professor in the Music Industry Departments at Drexel University and William Paterson University. She currently serves on the board of the California Copyright Conference (CCC), and is an active member in Association of Independent Music Publishers (AIMP), Woman In Music (WIM), and Sigma Alpha Iota (Professional Music Fraternity). She is also an active musician who currently performs in the Los Angeles Metropolitan area as a freelance flautist.

Michèle Vice-Maslin is an Emmy Award-winning music producer, arranger, songwriter for artists, films, TV, ads, promos, games and other special projects. She’s amassed numerous major label hit songs and cuts worldwide, as well as over 6,000 film/TV/media music placements for her companies Mob Force Productions and Sweetersongs.  Her hit song “Get Over Yourself” sung by pop stars, Eden’s Crush is listed on the Billboard Top 100 Girl Group Songs of All Time. She also developed and wrote with Kesha, when she was a budding pop star.

She has been nominated for and won numerous awards including Emmys and was on the Emmy-winning music team of “Guiding Light” for 18 years. Her popular signature course From Song to Sync has educated many who have gone on to do great things in the music business.

She is very involved in giving back to the music community that has given so much to her currently serving on the Television Academy Music Peer Group Executive Committee, the Production Music Association Composer Advisory Board, Writing Sessions America and others. In the past she served at NSAI as president of the California Chapter lobbying congress on Capitol Hill and she served on the NARAS Foundations Committee.

Originally from Queens, New York, Michèle works out of her studio Sweetersongs East in Santa Monica, California for her production company Mob Force Productions, and continues to enjoy her passion for producing, writing and publishing music every day.

Attention Attorneys: This virtual activity has been approved for Minimum Continuing Legal Education Credit by the State Bar of California in the amount of one (1) hour. The CCC certifies that this activity confirms to the standards for approved education activities prescribed by the rules and regulations of the State Bar of California governing minimum continuing legal education. Attorneys who wish to register for MCLE Credit must include their State Bar number with their Zoom reservation. Following this virtual webinar, we will verify your attendance via Zoom reporting and email your certificate of attendance to the email provided at registration.