“Here We Go Again…Mamma Mia! And the Rise of the Jukebox Musical” 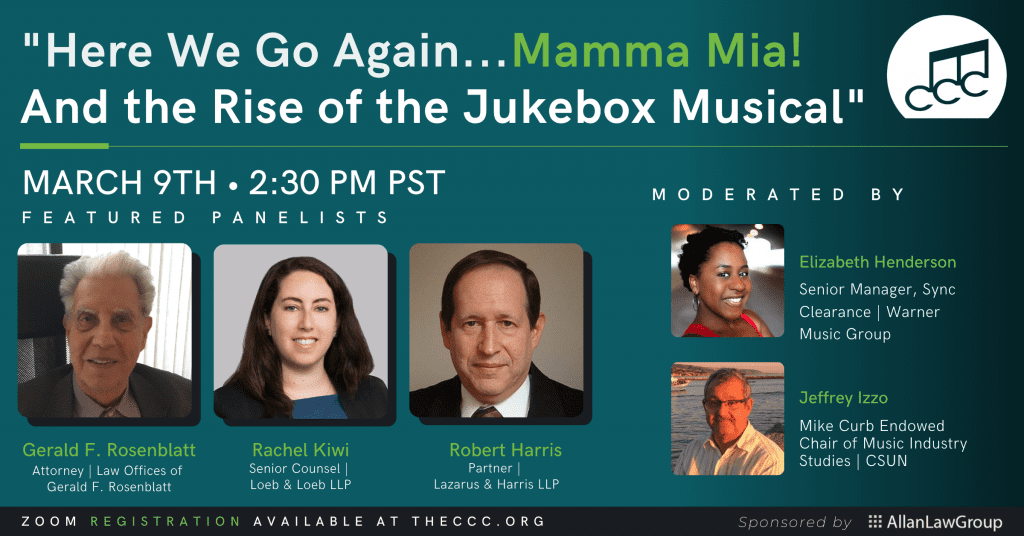 “HERE WE GO AGAIN…MAMMA MIA! AND THE RISE OF THE JUKEBOX MUSICAL”

From Beautiful to American Idiot to, yes, Mamma Mia!, the dominance of the jukebox musical cannot be denied. Just this year, The Cher Show earned two Tony awards, including Best Actress. So, what rights and permissions are involved in taking a catalog of hit songs to the Great White Way? What are the benefits of doing so for composers, lyricists, librettists, and publishers? What can they—and their attorneys—learn from the successes and failures of those that have gone the Broadway-bound route?

The registration deadline for this webinar is Tuesday, March 9th at 1:30pm PST.

*** Please note, Zoom webinar links for this webinar will be emailed to you one week prior to the webinar, or Monday, March 8th, or Tuesday, March 9th at 1:30pm depending upon when you register.

Register for this webinar below!

Thank you to our sponsor!

Elizabeth Henderson is a music industry professional with almost 15 years of sync and media licensing experience. She has held positions at IDJ Records, Universal Music Publishing Group, and currently at Warner/Chappell Music. Ms. Henderson is a member of the Board of Directors of California Copyright Conference and held leadership positions with Women in Music. She graduated from Penn State University with a Bachelor’s Degree in Business Administration/Marketing with an emphasis in Psychology and a minor in French.

Jeffrey Izzo is Assistant Professor and Mike Curb Endowed Chair of Music Industry Studies at California State University Northridge. An entertainment lawyer for over 25 years and an accomplished composer, lyricist, and performer, he has presented at numerous national and international conferences, is a contributing author to Music Entrepreneurship, and co-author of Introduction to the Music Industry: West Coast Edition. Izzo is an ASCAP affiliate and member of the Board of Directors of The California Copyright Conference, The College Music Society, the Association for Popular Music Education, The Recording Academy, The Society of Composers and Lyricists, the Dramatists Guild, Songwriters of North America, the Association for Popular Music Education, and The International Association for the Study of Popular Music.

Born and raised in Brooklyn, New York, Mr. Rosenblatt moved to Los Angeles in 1972. He’s a J.D. graduate of the University of Michigan Law School and a member of the California, New York and Federal (Second Circuit) Bars.

Prior company and studio Legal and Business Affairs experience with Colombia Pictures, 20th Century Fox, CBS/Sony Music, Motown and Capitol Records. Mr. Rosenblatt was “of counsel” to a leading Los Angeles entertainment law firm for 12 years before opening his Los Angeles practice in the early 1990s.

Current professional associations include the American Bar Association, California Copyright Conference (past President), and the AIMP, plus, he’s a lifetime member of The Recording Academy (Grammy’s). He has lectured on the subjects of entertainment law and specific agreements at several Bar Associations, The Recording Academy, ASCAP, national law schools, major film festivals and professional music schools.

Rachel Kiwi maintains a diverse entertainment and media practice with experience advising on licensing, acquisition, disposition, financing and exploitation of entertainment properties for film, television, podcasts and live stage productions. Her clients include producers, production companies, talent, executives, underlying rights holders, authors and investors in entertainment projects of all types. Ms. Kiwi has also served as production counsel for theater productions, independent films and television programs. In addition, she has been involved in structuring acquisitions, sales and joint ventures of entertainment businesses, as well as entertainment-related investment fund formations.

Robert Harris is a founding partner of the New York City law firm of Lazarus & Harris LLP and has been practicing entertainment and intellectual property law in New York City for more than three decades, representing clients in a broad range of entertainment media: counseling and handling transactional matters for theatrical producers and creative personnel on various Broadway and Off-Broadway productions; and representing publishers, authors, and agents in the publishing and theatrical fields. He counsels clients regarding the protection, licensing, acquisition, use and misuse of content in a broad range of contexts and media and has substantial experience in copyright and trademark law, including clearance, prosecution and licensing, and advises clients regarding ownership of copyright, licensing of copyrights, and analysis of rights under copyright in both traditional media and new media. In the area of trademarks, Mr. Harris advises clients regarding the selection and use of trademarks, service marks, and Internet domain names, in prosecuting trademark applications, and in negotiating and drafting licensing agreements. He has had extensive experience negotiating and drafting programming and network affiliation agreements for cable television, and represents producers of television programming. He offers counsel in the areas of the right of publicity, the right of privacy and defamation.

Mr. Harris has represented the heirs of both Ernest Hemingway and F. Scott Fitzgerald with respect to trademark prosecution and merchandise licensing, and has supervised copyright and trademark enforcement and prosecution for a number of properties, including the stage musicals Phantom of the Opera, Les Miserables, and Miss Saigon. He has acted as production counsel or counsel to talent on numerous acclaimed Broadway productions including Beauty and the Beast, Crazy for You, Monty Python’s Spamalot, Spring Awakening, The History Boys, August: Osage County, The Book of Mormon, War Horse, Kinky Boots, A Gentleman’s Guide to Love and Murder, All the Way; revivals of Chicago, Fiddler on the Roof, Hair, Annie, The Gershwins’ Porgy & Bess; and most recently Hadestown, Ain’t Too Proud, The Ferryman, and Harry Potter and the Cursed Child Parts One and Two. His renowned writer clients in various media include John Irving, John Kander, Fred Ebb, Burt Bacharach, Dorothy Fields and William Goldman, as well as other accomplished fiction and non-fiction authors, and actor Stacy Keach.

Mr. Harris has achieved the highest AV Preeminent (5 out of 5) Professional Rating from Martindale-Hubbell Law Directory, has been recognized as a SuperLawyer since 2008, and was selected by Best Lawyers as one of their “Best Lawyers in America” for their 2020 edition.