“Copyright Terminations: Taking Back the Song” 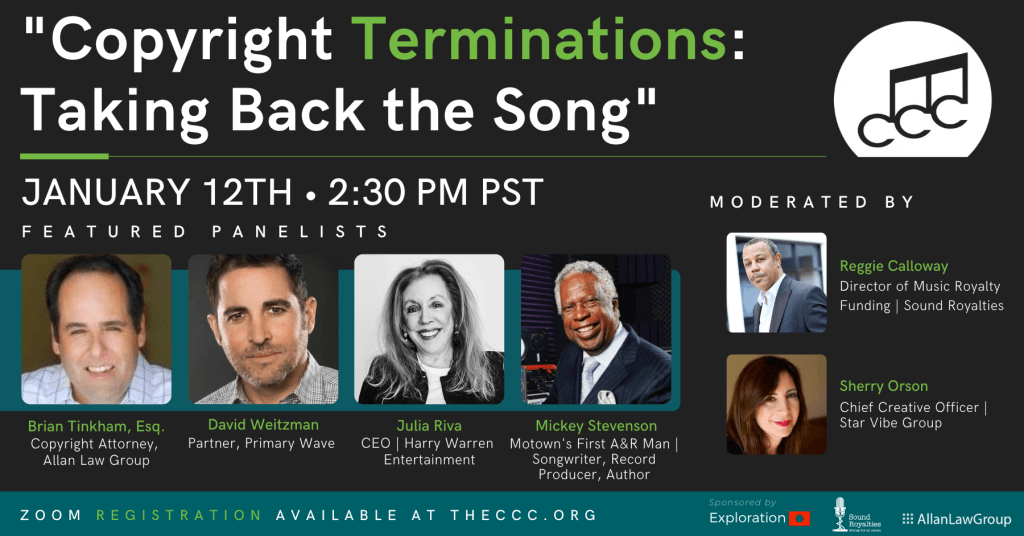 “COPYRIGHT TERMINATIONS: TAKING BACK THE SONG”

Songwriters and artists should be aware that under recent copyright law, they have a chance to reclaim their work. This panel features real scenarios with songwriters and artists that have acquired their work back from publishers and record labels. Plus, the steps you can take in securing back ownership and what losing compositions and masters to copyright termination may mean for record labels and publishers. Experienced copyright attorney, Brian Tinkham from Allan Law Group spearheads a group of copyright holders that continue to benefit financially from securing their rights back through the new Copyright Terminations Law.

Thank you to our sponsors!

Sherry Orson is a successful, established music publisher and licensor, having secured music on television shows on every major network, and with major label recording artists, advertising brands, in motion pictures and more.

Orson began her career in the music industry as a Creative Manager during the Richard Branson years with Virgin Music Publishing in Los Angeles. From there, she moved to Universal Music Group as Director of Creative Services for almost a decade, expanding her extensive experience in the fields of music publishing and licensing. While at Universal, she placed songs with major record labels on Platinum artists such as Christina Aguilera, Toni Braxton, Selena, Babyface, Jessica Simpson, Bette Midler, Chaka Khan and many others. In 2007, she joined musician and actor, Steven Van Zandt representing his music publishing company and rock record label, where she was responsible for placement of his roster of artists with major advertising brands: KFC, McDonalds and Fox Sports. Ms. Orson currently represents emerging artists and music catalogs for licensing in all areas of media through her own licensing and music catalog representation company, Star Vibe Group. Through Star Vibe Group, she recently placed and licensed songs from the roster to Amazon, CBS, HBO, Showtime, MTV, NBC, Fox, E! and many more.

Five-time Grammy-nominated artist Reggie Calloway graduated from Kentucky State University with a Bachelor of Fine Arts in Music degree. In 2011, he began providing financing for artists and publishers who needed a way to monetize their royalty assets. Reggie directed a sales team that was instrumental in bringing thousands of song titles to the market, including the music of artists Whitney Houston, 50 Cent, John Legend, Will Smith, 3 Doors Down, J Lo, Lil Wayne, Justin Timberlake, Timbaland, Earth Wind and Fire, Travis Tritt, and more. He received a Grammy nomination for R&B Songwriter of the Year for the hit song Levert’s “Casanova” in 1987.

Best known as the founder of the popular Techno-funk band, Midnight Star, Reggie led the group to international success writing, producing, and arranging a string of top mega #1 hits including “Operator,” “No Parking on the Dance Floor,” and “Freaka-zoid.” He penned songs for Teddy Pendergrass (“Joy”), Gladys Knight, (“Love Overboard”) and Natalie Cole (“Jump Start My Heart”). His “I’ll Be Good for You” was featured on N*SYNC’s 10 X platinum CD, No Strings Attached. Reggie is on the Board of Directors of The California Copyright Conference, The Funk Music Hall of Fame and is a Recording Academy District Advocate.

Sound Royalties: “As a lifetime creative and music business enthusiast, I have always dreamed of a way to empower all creatives through financing. What we are doing at Sound Royalties is bringing that passion to life by giving others a way to reinvest in themselves and make their dreams come true.”

Brian Tinkham is a 15-year attorney with a focus on business and entertainment litigation. He also provides general counsel advice to various entertainment-related entities and companies regarding best practices on how to avoid those litigation and related transactional issues. Mr. Tinkham has been named a “Rising Star Super Lawyer” by Superlawyers Magazine. In 2019, he was one of the attorneys who represented Sly Stone in his copyright termination negotiations with MIJAC Music.

At Primary Wave, David Weitzman’s focus is on sourcing acquisition of iconic and legendary songwriters to enhance the company’s growth strategy.

Julia Jo Riva is president of Harry Warren Entertainment. She’s is a veteran of music publishing with over 25 years’ experience. However, being that she’s Harry Warren’s granddaughter, it’s truly in her DNA. Julia’s background previous to the music industry, as a set and costume designer for motion pictures, has allowed her to bring the creative process and film production and licensing knowledge to HWE and her contemporary division, Red Queen Music.

Julia runs the day-to-day operations of Four Jays Music, which includes Harry Warren songs from the 1920s to the 1960s such as, “That’s Amore,” “You’ll Never Know,” “There Will Never Be Another You” and more. Plus, she oversees the catalog of Harry Warren’s classic copyrights including, “At Last,” “I Only Have Eyes for You,” “Jeepers Creepers” and compositions for over 300 films for Warner Bros., 20th Century Fox, and MGM Studios. Julia has devoted the last 27 years to preserving Harry’s legacy and his major contribution to the “Great American songbook.” Because of this, she knows well the process of copyright terminations and taking back the (Harry’s) songs.

Motown was the soundtrack of a generation and more than anyone else, Mickey Stevenson was responsible for creating its iconic sound, timeless hits, and beloved superstars. As Berry Gordy said, “Mickey was a street cat, a wheeler-dealer, but I knew it was that same quality that made him the superstar A&R man he was. It was really with Mickey that I began something that was unique to my management style: building the structure around the person rather than fitting the person into the structure.”

In addition to his A&R duties, Stevenson wrote and produced many hit records for Motown, some with co-writer and producer Ivy Jo Hunter. They included his biggest success, “Dancing in the Street,” which he co-wrote with Hunter and Marvin Gaye; “It Takes Two” (with Gaye and Kim Weston [Stevenson’s former wife]); “Ask the Lonely” for the Four Tops; Jimmy Ruffin’s “What Becomes of the Brokenhearted”; Martha & The Vandellas’ “My Baby Loves Me”; “Uptight (Everything’s Alright)” for Stevie Wonder, and Gaye’s “Stubborn Kind of Fellow.” He also wrote “Devil with the Blue Dress On” in 1964 with Shorty Long, which became a hit for Mitch Ryder and The Detroit Wheels in 1966.

And, he organized and established Motown’s in-house band, now famously known as The Funk Brothers.

Stevenson’s contribution to the fabric of American music and culture are showcased in his book, William “Mickey” Stevenson, Motown’s First A&R Man Presents: The A&R Man, and a feature film, MickeyStevenson The Man, The Myth, The Legend, The A&R Man that brings jaw-dropping events and his unique larger-than-life story to the screen.